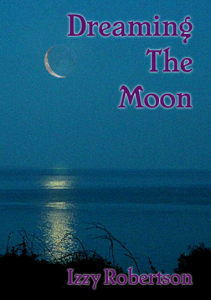 I am delighted and very excited to say that my first novel, Dreaming the Moon, will be coming out in paperback on 25th August 2014. The fantastic cover photograph was taken by the very talented Alex Smith (thank you so much) and formatted by the amazing web wizard, Simon West (again, thank you).

It’s a modern fantasy that follows Robyn, heartbroken and haunted by strange dreams, who discovers that this world is not the only one, but is separated from another magical realm by a protective shield that is failing. Thrown into a desperate situation, she and her friends are pitted against time and dark forces in a seemingly impossible task, the search for a lost fragment that will restore the shield and save both worlds.

If you like to look at life a little sideways, if you ask yourself sometimes ‘Was that only a bird rustling in the hedge or was it something else?’, or ‘Did I misplace my keys or is something otherworldly teasing me?’; If you’ve ever thought that the woods seem darker than they should when you’re walking alone at dusk, or wondered if it was just coincidence that you called your best friend at exactly the same time as he/she called you, then I hope that this will appeal to you. And if you’re not familiar with my work, may I (very cheekily) say that I have two ‘snack-size’ stories out as e-books: When Joe Met Alice and Catching Up With The Past, available from Magic Oxygen and Amazon, just in case you fancy an appetiser. 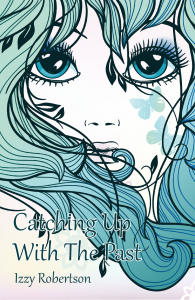 The wizards at Magic Oxygen pressed the button this morning and Catching Up With The Past has already appeared on the digital shelves of the Amazon Kindle store as I write. Needless to say, I am very excited! And although the process still seems like magic, there’s a lot of work that goes in  beforehand, so thank you Tracey and Simon West for all your hard work, and thank you also Sophie Graves, Anne Maloney, Lucy West and Abby Smith, for giving me such helpful feedback on the original.

As I mentioned in my last post, bullying is a theme in the book, and sadly still affects many people of all ages. If you are being bullied, please do not feel that it’s your fault, or that you have to suffer in silence. Tell someone you trust – you don’t have to be alone.

I hope you enjoy the story!

It’s almost the end of February already! Hard to believe but still, time does fly. Though I haven’t been posting much on here I have been working (honestly!), editing my NaNoWriMo novel and finalising my next title which will be coming out as a Kindle book this weekend. Another long short story, it’s called Catching up with the Past and deals with the subject of bullying (that age old problem), but from a slightly different angle.

Although my writing takes a slightly otherworldly twist, this subject is a serious one and unfortunately does not seem to go away.

Bullying on any level is abhorrent and wrong, and although the physical side is more obvious, the verbal side, especially the casual comments and put downs that are supposed to be ‘just a bit of fun’ can be just as damaging, particularly when it comes from those who say that they’re your friends.

It happened when I was at school and it’s still happening now, unfortunately amplified by social media. I hate the thought that anyone feels like I did all those years ago, or like Jo-Jo did in the story. If you are, or have been bullied, you are not alone, but PLEASE TELL SOMEONE and do not suffer in silence.