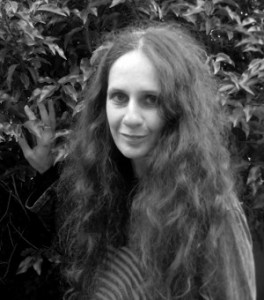 Izzy Robertson was born in London and grew up in Slough. She read and wrote voraciously as a child, but took the science route at school. Trained as a physiotherapist (which suited her bossy streak) at St. Mary’s Hospital, Paddington, she worked in the NHS for about 15 years in Slough and in Ealing, treating patients with musculo-skeletal problems and long term pain. In 2006 she and her family escaped from the urban jungle of the south east to the deepest, darkest wilds of Dorset. She now works freelance as a complementary therapist and writer, and dabbles in jewellery making to satisfy her inner magpie.

When not gainfully occupied with the above she is often to be found chatting to her chickens, taming tomatoes in the greenhouse, having a nice cup of tea with her husband or driving her musical teenagers and their amazing band around in the ‘tour bus’ (read old Vauxhall Agila, bright yellow to boot).

Izzy’s stories reflect her love of the unusual and magical, and are aimed at young adults (whatever their age). “Maybe I never really grew up” she says. “I love the thought that anything’s possible. Someone once told me that magic isn’t all whizz-bang theatrics, or even very complicated – it’s the occurrence of the unexpected. We just have to open our eyes and look.”