I am pleased to have another guest post from the talented Connor Cadellin Mckee, introducing his new story, A Cloak of Glass, a short prequel to his dark, dystopian novel Children of the Crater, which was released in May 2014. And lucky us, this one’s free to download. Thanks, Connor! 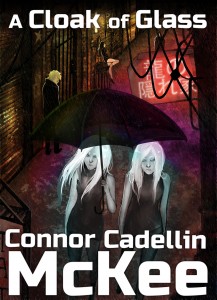 It happened on the 19th of July, 2014. I was sitting in a Dutch coffee shop, a warm drink resting on the knotted wooden table before me. I was thinking not of drinking, but of stories. I wanted to write a prequel to Children of the Crater, that much I had worked out, but which characters to follow? One by one I ticked off Vanir in my head; many of my characters were simply too young to have much more backstory than I had already given them. At the moment my mind reached the twins, two identical women walked in and took a seat at the table across from mine. I said nothing to them, nor they to me; but the idea was planted.

By that evening I had the story mapped out, and now here we are. A Cloak of Glass has been released here on the internet (for free) via Smashwords. The twins are such mysterious characters to me, they are really fun to write about. Enjoy!