Her cry had us all running from wherever we were, the kitchen, the barn, the vegetable garden, the hen house, running up the pocked, rough track that served as a driveway to the wide wooden gate.

“Look, look,” she was calling, pointing upwards with both hands at once. “They’re really here. At last.”

I stopped and squinted into the sky, the brightness hurting my eyes after the dimness of the barn. Occasional ribbons of white cloud broke the aching blue, straggling across it with no urgency whatsoever.  The tops of the trees were utterly still, not a whisper of a breeze to stir them. The grass was dry and brown, the dust heavy on the track and the road beyond. It had been like this for days. As if the world was holding its breath, just waiting for them.

It was said around these parts that if the swallows didn’t come, then the summer rains wouldn’t be able to follow them. And then the fields would be dry and the crops would fail and the land would remain fallow until they returned. Old wives’ tale? Superstition? Maybe. But no more than wassailing in the orchards at the start of winter to honour the trees and ensure the next year’s crop. No more than the elders knowing what weather brewed from the exact shade of the sunset.

We watched as they flew in, swooping and gliding low over the road then looping up over our heads and swinging away to make another pass. Their wings flittered tirelessly despite the many miles they had covered and they swirled and spun in a joyful frenzy, sometimes stopping momentarily at the stream to drink before taking off again. We watched, entranced, until they began to settle, finding the nooks and crannies around the house and barn that were their home from home. Then, as one, we breathed a collective sigh of relief as the leaves on the trees began to stir and the clouds scudded faster across the sky. 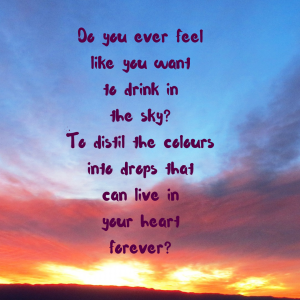 Once there was a girl who had a rainbow heart.

It called to the sunrise, lavender and soft rose birthing a new day.

It soared in the shocking blue of a clear summer sky.

It drifted with the cirrus and the cumulus and roared with the steel grey storm clouds.

It danced as low mellow light fell through branches and turned fallen beech leaves into rivers of molten copper.

When the sun gilded the horizon with gold, it sang.

It inhaled the sunset, the deep reds and oranges lasting only a few moments before the cloak of twilight hid them away.

It slumbered beneath the indigo night and dreamt of stars.