I am excited! On Monday 26th May, Children of the Crater, the first novel from the very 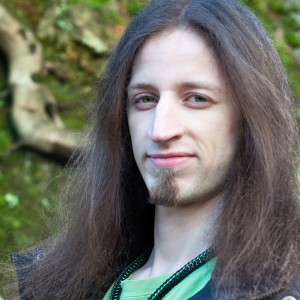 talented Connor Cadellin McKee is launched to the world. Lucky world! Having had the privilege of editing this book, I know first hand just how good it is – a dark dystopian fantasy which raises all sorts of questions and will leave you breathless. Here’s what Connor has to say about it 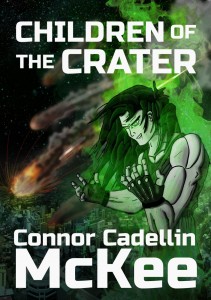 Five years ago, my 16 year old self had a dream. One of those really vivid ones that makes you sit up in the night and scrabble for a pen and paper because it was so vivid.
Now, I used to write down an awful lot of these, but this one was special. My recollection was fragmented, but I had the important pieces. A man tumbling down into a crater ringed with riot police. Flying above the night sky, green flames writhing across my skin. A longhouse hidden deep in the jungle. It was fantastic; I wanted to meet these characters, learn their story.
I used to do sketches from the more vivid dreams, and I got to work pretty quickly on this one. I tried making it into a graphic novel originally, but the sheer level of drawing needed for that dissuaded me. It wasn’t until that summer that I had the idea of writing it down on a computer. It weaved and shifted as the years went by; I continually chopped it up, rearranged it, threw in new sections, and it began to materialize from a myriad of different scraps of paper and text documents on my old laptop.
And suddenly the release date is upon me! It feels almost unreal; I had never expected it to come this far. Children of the Crater as it is now called, is a book sitting on my shelf, with my name and the character I once sketched out on an airline napkin. It almost makes me wonder how many undiscovered worlds are out there, sitting in desk drawers.

One thought on “Connor Cadellin McKee launches Children of the Crater”