I bought this beautiful card several years ago and it planted the seed for this little tale which is part of a collection I’m working on entitled Great Grandmother’s Tales From The Shore. 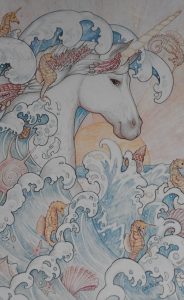 “We always collected things when we went to the beach, shells, stones, driftwood, bits of sea worn glass. Treasures from the deep, Great Grandma called them. Gifts from the sea. They all have a tale to tell, a secret history. You just have to open yourself to it.

I love the turret shells because they aren’t really shells at all. People only think they are because they’ve lost the ability to believe in anything that can’t be proved. And maybe they do get seconded by homeless invertebrates from time to time. Maybe the hermit crab isn’t the only thing in the sea that lives as a squatter. I don’t know. But I do know they’re not shells.

See, when the white horses are first born out in the waves, they all have a horn, just the one, in the centre of their foreheads above their eyes. And to start with, they live out there amongst the rollers and the breakers, learning to trot and canter and gallop, to race the winds as they whip the surface, to swim in the deep blue as the sun turns it to gold.

But when they come of age, they reach the time of the calling. It is a choice that each and every one must make. They are drawn towards the shore and, in the in between, where the water changes colour as the earth rises beneath it, they must decide whether to stay in the sea or forge a new path on the land.

Those that come ashore hide in forests and green places. We call them unicorns.

Those that remain behind lose their horns. They stay and play out in the open water. We only see them as white caps on the waves.

The horns become houses for little shellfish. Or mementos picked up on a day at the beach.

There are less of them now. Far less than when I was a child. I wonder why that might be.”