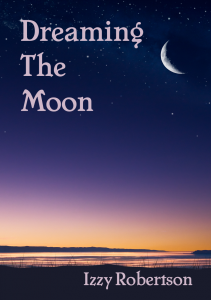 It is a year today that my first book Dreaming the Moon was officially released in paperback. It was launched with titles from six other authors at a fantastic event in Lyme Regis organised by Magic Oxygen Publishing, which also incorporated the announcement of the winners of the first Magic Oxygen Literary Prize. It was a wonderful day, both an honour and very humbling to be surrounded by so much creativity and talent.

So Happy Birthday to my book and here’s a little excerpt from it:

There was a sharp stinging sensation on her left calf. Instinctively she reached down and rubbed it, thinking that she had been stung. Several seconds later, there was another on her hip, more of a blow this time, and then again on her shoulder. Robyn began to walk but the strikes continued and she noticed that small pebbles were falling all around her. There was a chittering in the scrubby grass and gorse either side of the path, high pitched spiteful laughter, leaves rustling and twigs snapping despite the stillness of the air. Robyn broke into a jog then a run as the stones became a hailstorm. She could just make out creatures in the grass, small twiggy limbed figures with long noses and angry eyes. There seemed to be a lot of them. And then the first one leapt onto her back, its gnarly fingers yanking at her hair.

“Get off me,” she shrieked, grabbing frantically behind her and flinging it away by its spindly arm. Another one had attached itself to her leg. Stones were still raining down on her, dust rising around her as she ran. Panic was nearly choking her now as she felt more of them grabbing at her, leaping in front of her, trying to trip her and bring her down. She stumbled, twisting her ankle but managing to keep her footing, slowing under the onslaught of pinching and scratching and stones. Just as she felt that she couldn’t go on, she heard Fiona’s voice, a memory in her head. “There are charms that will protect you from the fey, should you need it. Salt’s one, iron’s another, they’re the strongest. But red thread, bells and chimes, even turning your clothes inside out will work.”

Robyn grabbed the bottom of her T-shirt and wrenched it over her head, dislodging several of the little demons and sending them flying. Slowing momentarily, she flung it back on inside out, immediately relieved to find that the rest of them fell away. The storm of pebbles continued however and she accelerated back up to a run despite the pain in her ankle, not slowing until she reached the garden at the back of the shop. She fumbled desperately for her key, struggling to get it into the lock with her shaking hands, and flung herself through the kitchen door, collapsing onto one of the chairs as her knees gave way.

Jim was standing by the counter waiting for the kettle to boil.

You can check out my titles and those of the other Magic Oxygen authors using the link at the top of the page.